The Vietnam Association of Seafood Exporters and Producers (VASEP), said that in the first half of the year, shrimp exports reached 2.3 billion USD, up 33% over the same period last year and accounting for 40% of total seafood exports.

In particular, lobster exports recorded a record growth, reaching nearly 130 million USD in the first half of this year, up 30 times over the same period last year. This is also the type with the leading growth rate in the shrimp group. Currently, exports of processed vannamei shrimp in the first half of the year increased by 17%, fresh/frozen shrimp by 21%, and black tiger shrimp at $300 million, up 20%.

VnExpress 's survey also showed that in the first half of the year, thanks to high export demand, lobster prices continuously increased, sometimes doubling, to 1.7 million dong for lobster and 1.3 million dong a year. kg with green lobster. This is the year that lobster farmers are profitable after 3 years of being affected by the Covid-19 epidemic. 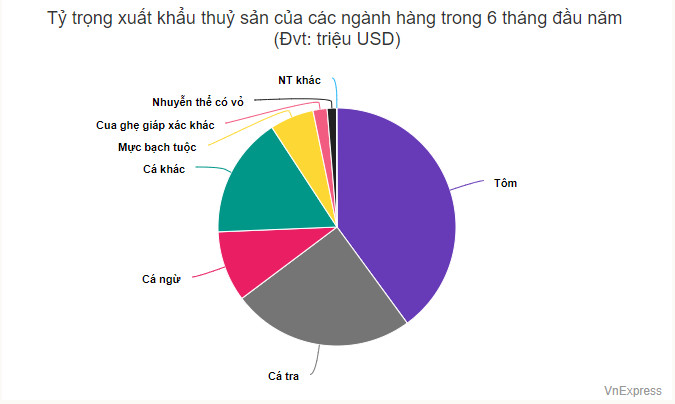 Vietnam's major import market, China, recorded a breakthrough when in May, this country imported over US$108 million of Vietnamese shrimp, an increase of nearly 29 times over the same period last year. Accumulated in the first 5 months of this year, shrimp exports to the Chinese market reached US$275 million, up 101% over the same period last year.

The reason for the increase in shrimp exports to China and many markets is because of the increased demand for seafood in other countries. In the Chinese market, due to the closure of the country to prevent Covid-19, production activities have stalled. The market of 1.5 billion people falls into a situation of shortage of seafood supply for domestic consumption and export processing.

Although import demand in many markets has increased, according to VASEP, price inflation and lack of raw materials are a difficult problem for shrimp businesses in the current period. To overcome the above scarcity situation, many businesses have chosen to promote the raw material area and increase the percentage of value-added processed shrimp to export to high-end markets such as Japan, the US, and the EU. scarcity of raw materials.
Source: Vnexpress