An ounce of gold fell by more than $30 yesterday, driven by a stronger dollar and rising US government bond yields.

Closing the session on September 15, each ounce of world gold for immediate delivery fell by $31 to $1,665 an ounce. During the session, the gold price at one point dropped to $1,659, the lowest since April 2020. This morning, the price continued to go down, currently at 1,663 USD. 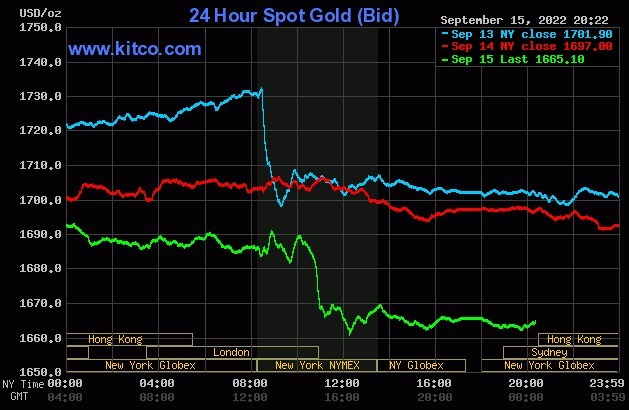 "In yesterday's session, the biggest impact factor was the rise in US government bond yields after a period of stagnation," said Daniel Pavillonis, senior market strategist at RJO Futures. The dollar also increased yesterday, putting more pressure on gold as investors bet the US Federal Reserve (Fed) will continue to raise interest rates strongly.

The market now thinks the Fed will raise rates by at least 75 basis points at next week's policy meeting. Even the possibility of a 100 basis point increase (1%) is increasing.

The precious metal then only recovered somewhat thanks to a report that showed US retail sales unexpectedly increased in August. Another report also showed that US jobless claims fell 5,000 last week.

Although gold is considered a traditional tool to hedge against risks of economic instability, rising interest rates make non-interest-paying instruments like gold less attractive. Central banks around the world are simultaneously raising interest rates to keep inflation in check. On September 14, the Managing Director of the International Monetary Fund (IMF) Kristalina Georgieva also called on these agencies to persevere in the fight against inflation.

"The strengthening of the USD this week, also with rising US government bond yields and higher-than-expected US inflation data has kept gold and silver buyers out of the market," said Jim Wyckoff, senior analyst at U.S. Kitco Metals concludes.
Resource: Vnexpress