Ukraine's Ministry of Energy announced the suspension of electricity exports due to the destruction of many infrastructure facilities by a Russian missile strike.

Energy Minister Herman Halushchenko said it was the biggest attack since the beginning of the war on Ukraine's power grid, noting that Russian missiles had hit "the entire supply chain in order to make it as difficult as possible for the process." converter".

Ukraine's military says Russia has launched 84 cruise missiles into the country, 43 of which were intercepted. The raid, the heaviest attack on Kiev in months of silence, comes a day after Moscow accused Kiev of being behind an explosion on the Crimean bridge on October 8.

Ukraine's Prime Minister Denys Shmygal said 11 of the country's critical infrastructure had been damaged, while Ukraine's National Emergency Service reported at least 11 people were killed and 64 injured in the attack.

The four provinces of Lviv and Ternopil in the west, and Poltava and Sumy in the central and northern regions, lost power completely, while energy supplies were also partially disrupted in the rest of Ukraine.

Russian President Vladimir Putin confirmed the attack on Ukraine's energy infrastructure, military command and communications, repeating the accusations of the Security Service of Ukraine (SBU) of carrying out the Kerch Bridge attack. in Crimea on October 8 and called it an act of terrorism that destroyed vital Russian civilian infrastructure. 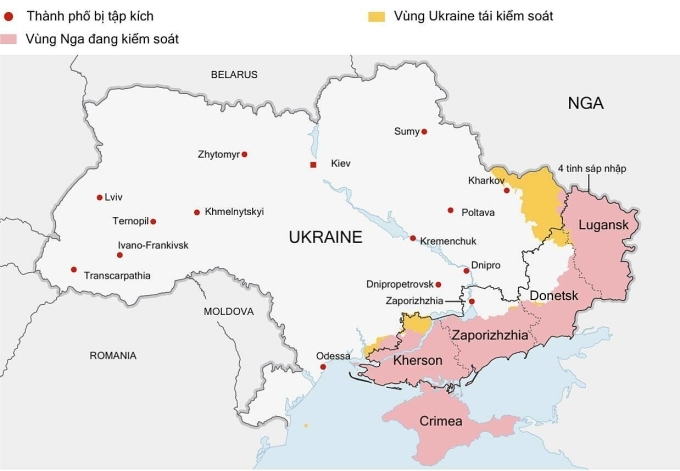 Ukraine's electricity grid connected to the European power grid in mid-March, helping to stabilize the supply continuously despite the hostilities. Ukraine started exporting electricity to the European Union (EU) through Romania from the beginning of July. Ukraine's Energy Ministry then expressed its desire to collect about 1.45 billion USD from electricity exports to the EU this year.

President Volodymyr Zelensky said at the end of July that electricity exports not only help Ukraine increase foreign exchange earnings, but also help its partners resist the energy pressure that Russia is pressing. "We will step by step make Ukraine one of the countries that guarantee energy security for Europe," he said.
Resource: Vnexpress